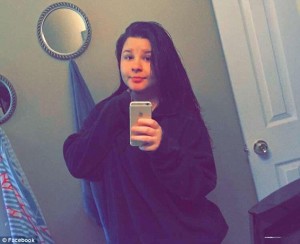 All that Kayla Otero left behind early Tuesday was a sloppy note in her bedroom saying she was sorry. It’s been four days since the homeschooled 18-year-old girl has been seen and family members are worried about what may have happened to her. Early Wednesday as her parents got up for work they noticed she had vanished from their Windjammer Lane home. They found their daughter’s goodbye note, her bedroom window open and her cell phone on the front lawn. “I know people will think this is just a teenager lashing out but she’s never done anything like this before,” her father Angel Otero said. “She’s a good girl and is really immature for her age and that could leave her very vulnerable. Everything about her missing is just really suspicious and out of the ordinary to us.” Her family filed a missing persons report on Wednesday. Orange County deputies then added her disappearance to the state’s missing person database. Her father said he also hired a private investigator to look into the case. “The thing that was really weird to me is her phone being left in our yard,” her older sister Gianna Otero said. “Why would it be there? It doesn’t make any sense why she wouldn’t go back for it. I mean maybe there was some sort of struggle or something.” Her father said her disappearance comes about a month after he found out about her getting together with a man she’d met online. “We sat her down and talked about the dangers of meeting people online and she confessed to me and her mother about having him in the house,” Angel Otero said. He said they told her it wasn’t safe to continue seeing him and “she didn’t like that at all.” He said she is very childlike and loves watching Disney Channel and strutting around the house in her “Frozen” pajamas with Olaf on them. She is 5 feet, 5 inches tall and weighs about 140 pounds. “She’s my baby,” he said. “I just can’t help thinking about the worst case scenario.” Family members have been putting up posters all over Central Florida and in their neighborhood, which borders the Arnold Palmer Bay Hill golf course near Windermere. They have also been going door-to-door and into businesses to try and track down where she might be. Gianna Otero said Kayla was the only of her three sisters who was homeschooled. She said their parents took her out of public school after her grades started dropping.

“She doesn’t have many friends and I think she is lonely…” said Gianna Otero, 21. “I’m just hoping she’s OK because she’s never done anything wrong and is very sheltered. She could be anywhere and thrown into anything.” She said a day before her disappearance their family had a barbecue around their pool and had a great time. She’d also recently had gotten her sister a job at a local car wash. “It was her first job and she was excited,” Gianna Otero said. “We were also talking about getting her a license and a car. It’s just not like her to do something like this.” Anyone with information on Kayla Otero’s whereabouts can call Det. Eli Muniz at 407-254-7012