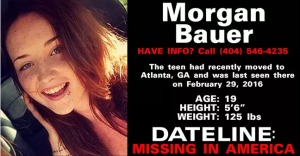 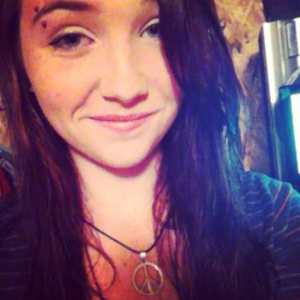 Morgan Bauer left her hometown of Aberdeen, South Dakota, and headed to Atlanta, Georgia, early last month. Now the teen’s family says she has gone missing.Bauer, 19, was ready to move out of Aberdeen and make a new life start in Atlanta. After riding with a friend to Minnesota, she boarded a plane headed to the southern city on February 12. However, her family back in South Dakota has not heard from the teen since February 25. “She wanted to be her own person, move to a big city and spread her wings,” said Sherri Sichmeller, Morgan’s mother. “For her to go completely silent on all counts is not her.” According to Sichmeller, Morgan Bauer had met a man on Craigslist and was supposed to stay with him until she found a job. She was to clean and do other household chores in lieu of paying rent. “I didn’t want her to really go to Atlanta. It was something that was really worrying me. But Morgan does everything 100 percent,” Sherri said during a recent interview. At some point, Bauer was thrown out of the temporary home, but refused to come crying back to Aberdeen. She moved into a motel and made ends meet the best she could. Her mother said Morgan began dancing at a local club to earn money. However, Atlanta police have been unable to determine which club she may have worked at. Many of the businesses interviewed by police said Bauer did ask about getting a job but did not have the proper paperwork in order to apply. Sichmeller said her daughter was definitely in “survival mode” and now fears the teen is in deep trouble. She is nearly convinced Morgan has not been heard from because something terrible may have happened.

All of Bauer’s social media accounts have gone silent, and her phone is turned off. She has stopped responding to family and friends since a final Snapchat message sent on the night she disappeared. Sherri and her husband have made numerous trips to Atlanta, passing out and posting flyers that include Morgan’s picture. Thousands of people have taken to Facebook to offer support and draw attention to the missing girl. Morgan Bauer is five feet, six inches tall and weighs 125 pounds. She has long brown hair and blue eyes. Anyone with information about the missing teen are urged to call the Atlanta Police Missing Person Unit at 404-546-4235.